Delivering Happiness by Tony Hsieh: Failures and Pivots along the road to Happiness

Last night I read most of Tony Hsieh’s new book Delivering Happiness, due out in June.  In it, he describes his career as an entrepreneur from the age of nine, when he started a worm farm in his parents backyard (not a single worm lived through the month!). 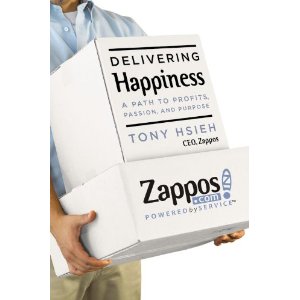 I was struck, especially after my last post, at how many different businesses he tried in his life before he started Zappos, and how many were either “meh”, or failed completely. Here is a fairly complete list:

Throughout his life, he has been continually trying new things, and gaining experience at succeeding, failing, and making decisions about when to keep going, and when to give up.

If you look at Zappos today, it seems like they’re on top of the world. But when you read Tony’s book, there have been some harrowing and very risky pivots they undertook to get to where they are.

Here are the Cliff Notes : Zappos started as a web-based company that contracted with shoe brands to drop-ship product to customers. It was hard to convince large brands to do business with them, so they bought a retail store to have access to more brands. A large percent of customer purchases were late or never delivered. They started stocking products in their office to increase reliability, outgrew the office space, and rented space across the street. They dumped their drop-ship business (which accounted for significant revenue), so that they could make reliability a cornerstone rather than a hope. They outsourced their warehousing operation to a vendor in Kentucky, lost 20% of their inventory in a truck crash, watched the oursourcer fail, then built their own warehouse operation in Kentucky. Tony sold everything he owned to raise money to buy more inventory. They decided that customer service was their #1 priority, and moved the entire company to Las Vegas. During all of this, they almost ran out of money multiple times, and had to negotiate with vendors, investors, and employees to try to bridge the gap, as well as sell off everything Tony owned to make payroll and stock inventory.

The end of the story is something we all know now: He went on to create a very inspiring culture where “Delivering Happiness” is the company’s brand promise. (As an ex-raver , any CEO who bases his company on the concept of PLUR warms my heart. I’d love to go out dancing with him and the Zappos folks someday).

But along the way, Tony and his team has learned to stay creative, positive, and solution-focused in the face of dire, difficult circumstances.  Then, and only then, did they arrive at the place where they could choose to create happiness, rather than just staying afloat.

Marcy Swenson is an executive coach who works with tech startup founders and leaders. She writes about about entrepreneurs, leadership, and startup culture on her blog at StartupHappiness.com. She is studying what factors contribute (or detract) to creating a happy startup culture. Prior to becoming a coach, Marcy was a co-founder with two successful exits; at CPTH (Nasdaq), she built the tech team that led to IPO. Forbes names CPTH the fastest-growing high-tech company in the world in 1999. CPTH grew to 3000 employees in 4 years; for comparison, Google grew to 3000 employees in 6 years. View all posts by Marcy Swenson

Marcy Swenson and Dale Larson are executive coaches who work with startup founders and entrepreneurs. They are certified and credentialed coaches who’ve been working full time with this specialty for ten years, and were among the first to do so. They’ve helped hundreds of clients, including some of the hottest names in Silicon Valley, supported them from concept to profitability, through IPOs and acquisitions as well as billions in venture funding raised. Their clients work with more ease and happiness yet are more effective and higher performing as leaders and in the rest of their lives.

As a veteran of ten startups and small businesses as a founder or early employee, and as a consultant and advisor, Dale helped bring hundreds of products and services to market over nearly 30 years. Now a full-time executive coach to mostly venture-backed tech startup CEOs, he helps high-performing leaders to be happier and more successful in all aspects of their work and life, continuing to learn and grow while they build outstanding products, teams and businesses.
dale (at) startuphappiness (dot) com
LinkedIn Twitter

Prior to becoming a coach, Marcy was a co-founder and VP Eng with two successful exits. The most recent was Critical Path (“we handle the world’s email!”). She built the tech team that led to IPO (Nasdaq: CPTH). Forbes named CPTH the fastest-growing high-tech company in the world in 1999. She works primarily with tech startup founders and teams.
marcy (at) startuphappiness (dot) com
LinkedIn Twitter